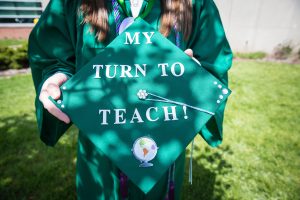 I come from a long line of educators. In the early 1900’s, my great grandmother, Ada Barton, started teaching when her husband died in his 30’s, leaving her with two young children: my grandmother, Pauline, and her sister Margery. The teaching legacy continued through my grandmother, my grandfather, my great Aunt Martha, all of whom were teachers in rural, mid-west America.

Following in their footsteps, my father became a university professor of theatre. I recall, as a child, spending many evenings in the theatre, watching my father and his students rehearse as the words of Shakespeare, Chekhov, and Ibsen washed over me. Back then, I wasn’t aware of the seeds being planted that would eventually become the focus of my work: teaching, literacy, and language development.

In 1994, I received my BFA in Theatre, and in July of 2000, I received my Master’s in Education and my elementary teaching license from the University of Colorado, Boulder. Upon graduating, I was hired as a 3rd grade teacher at Harrington Elementary, an urban, public school in Denver. Toward the end of my first year of teaching I was asked to become a demonstration “lab classroom teacher” for the Public Education and Business Coalition (PEBC), a Denver-based nonprofit organization that promotes teachers’ professional development in the area of thinking strategies instruction. For the next five years, local and national educators visited my classroom to observe my readers’ and writers’ workshops.

In 2004, through the PEBC, I learned of a grant that funded summer renewal projects for public school teachers. A colleague and I wrote a proposal to attend yoga teacher training at Mount Madonna Center, a yoga retreat center in the coastal mountains of Northern California. We received the grant and became certified yoga teachers. Subsequently, I was offered a fourth-grade teaching position at Mount Madonna School, an independent, K-12 school on the grounds of the yoga center.

For five years I lived at the Mount Madonna Center teaching fourth grade and working as a curriculum and staff developer with Mount Madonna School. I also worked as a yoga teacher, a yoga teacher trainer, and a service-learning facilitator in the work/study exchange program. My five years at Mount Madonna Center gave me the chance to cultivate a consistent yoga and meditation practice and contemplate the next steps in my work as a teacher. It became clear—after working with adult learners (e.g., yoga teacher candidates, Mount Madonna School colleagues)—that I wanted to further develop myself as a teacher of teachers (i.e., teacher educator). I realized that pursuing a PhD would also give me an opportunity to examine persistent problems of practice, related to students’ literacy and language development, through classroom-based research.

In the summer of 2010, I attended the Future of Learning Institute at Harvard University, which confirmed my desire to return to school.  I realized that pursuing a graduate degree would allow me to investigate my unanswered questions about literacy instruction, teaching, and curriculum development as well as work with pre-service and in-service teachers and students.

I was accepted into the Literacy, Language, and Culture PhD program in the School of Education at the University of Michigan in Ann Arbor and began my doctoral studies in 2011. During my time there, I was a research assistant on the Language and Meaning Project, which was supported by the Institute of Education Sciences, U.S. Department of Education. Drs. Mary J. Schleppegrell and Annemarie Sullivan Palincsar were the co-principal investigators of this project. I also taught a literacy methods course in the Elementary Teacher Preparation Program—one year as an apprentice and the subsequent two years as the instructor of record. My dissertation was directed by my advisor, Annemarie Palincsar. Mary Schleppegrell, Gina Cervetti, and Diane Larsen-Freeman were my other committee members. In 2015, I received my PhD in Educational Studies and accepted a tenure-track faculty position at Michigan State University in the Department of Teacher Education.

At Michigan State University, I taught undergraduate literacy methods courses, courses such as ESL Classroom Practices: K-12 Literacy Instruction and Inquiry Into Classroom Teaching and Learning in the online Master of Arts Teaching and Curriculum program as well as doctoral courses, such as English Language Learners in Content Areas: Constructing Research Communities & Resources.

A few years ago, a family friend found a record of Amelia Symons and her infant son, James Edward, my great grandfather, on the 1889 England to America ocean liner passenger list. Their final destination was Michigan, where they joined her husband, Thomas Symons, who had preceded them to America the year before. With my husband and I now living in East Lansing, Michigan, it seems my family lineage—beginning with those who emigrated from Great Britain to the U.S.—has come full circle.

Searching is in progress